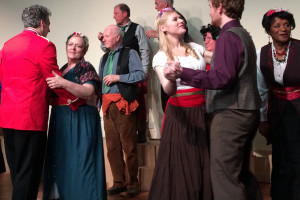 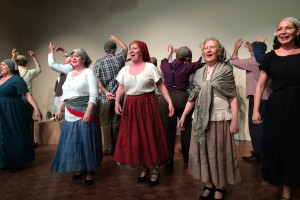 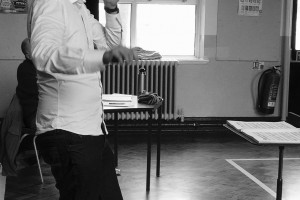 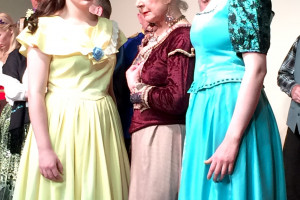 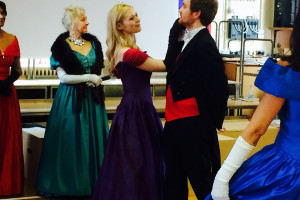 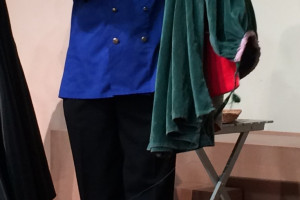 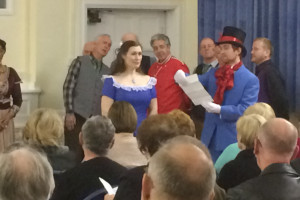 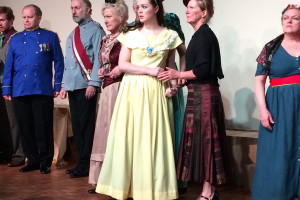 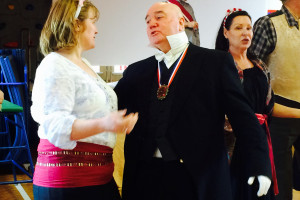 Before I begin on this specific production I just want to say how very much I admire and respect this group who present fully staged and costumed grand operas in the most ‘ordinary’ venues and ‘tour’ with their current production to 4 or 5 different venues over a period of 2-3 weeks.  For example I saw this current production in Holy Trinity Church Hall in Southport and the day afterwards they present the same show in a school hall in Liverpool. In this way, they are bringing grand opera, sung in English, to a wide variety of people who would otherwise have little or no access to it, at affordable prices and in a language they immediately understand.  As if that were not challenge enough, they often double cast some of the roles, in this production no fewer than 5 roles were double cast – so giving as many as possible a chance to perform as soloists.

All this sounds as if I am going to go on to say that the production was somewhat below par when in fact nothing could be further from the truth.  It is true to say that the ‘staging’ is, by necessity, rather basic, but the singing is everything you could possibly expect (and more) from any opera company wherever they are performing, the singers I was privileged to hear would not have disgraced any theatre, amateur or professional, the length and breadth of the country.  Added to that and enhancing the production enormously, the acting was similarly impressive so that if we did ‘miss’ the words the acting made their meaning more than clear.

They are accompanied by a piano and whilst the music of Tchaikovsky does lend itself wonderfully to an orchestra so talented was the pianist, Robert Chesters that it certainly did not suffer.  I must also mention the M.D., Marco Bellasi, who was conducting, his passion for the music was so apparent, that he became very much a part of the whole production.

This was an opera I was totally unfamiliar with however I left at the end of the evening with a firm grasp on the story (having been considerably humbled by the standard of the wonderful singing) which I had thoroughly enjoyed, as a total piece of theatre, telling a story from beginning to end, with all the high drama of a dual and unrequited love thrown in for good measure and I heard and understood the vast majority of the words – what could be better.

Regular readers of my reviews will know that it is rare that I mention any performer by name in this case however I feel I must make an exception – although all the singers ranged from good to excellent Heather Heighway who played Tatyana (on the night I attended) was simply superb.  This was a huge role which she performed (both singing and acting) excellently – thank you.

There is really nothing further I can say – I want to mention more of the principals but to do so would be grossly unfair to any I missed out – suffice it to say you all did a wonderful job and thank you SO much for a simply wonderful evening, and for making me so very welcome.

I was privileged to see the second performance of Eugene Onegin presented by Opera Viva and I would like wholeheartedly to agree with the above review.  I was invited to see this performance as a number of the principal roles were to be played for one night only by alternative cast members during Opera Viva’s four-night tour. I would like to mention Louise Geatch who gave an excellent performance as Tatyana, her acting and singing was superb and due to the closeness of the audience to the singers you could easily see the myriad of feelings and the conflicts her character was going through. As my colleague highlighted above I would like to have mentioned more of the principles but I would not like to miss anyone out, but all the principles did a very good job acting and singing admirably with good diction and clarity of words meaning the audience could follow the story easily. There was also some lovely spine tingling singing from the chorus who supported the principle cast well.

As previously mentioned due to the limitations of the venue scenes were set with the use of props which was more than adequate and effective, and costumes also enhanced and fitted the production well.

This was an excellent evening’s entertainment, listening to wonderful singing and watching superb acting. I firmly believe that Opera should be more accessible to everyone and Opera Viva are fulfilling this belief. Well done to Producer David Palmer, Assistant Producer Jim Craig and Chorus Master Isobel Jenkins and all involved in this production Thank you very much for inviting us and making us very welcome. We look forward to seeing you for your next production.